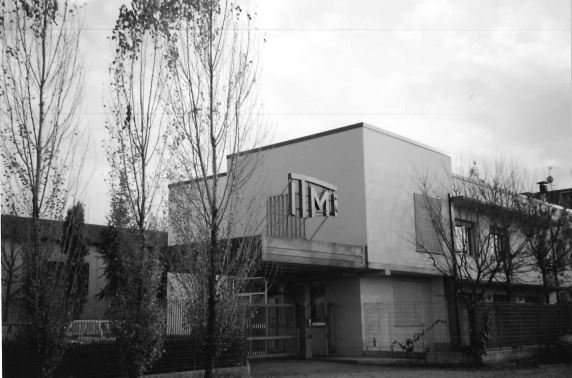 The Balboni family is one of the most ancient family in Cento and is integral part of the “ municipal nobility” of the ancient and industrious city of the Emilia region in Italy.   Already in the year 1209, within the Centese Community, the Balboni are well remembered; in fact, the “document” with which the bishop of Bologna (February 9, 1209), Geraldo Ariosto, grants the Cento population the jus piscandi for the Floriana Valley, remembers within the witnesses Michele de BALBONIS, that from an historical communal Archive appears as well as a Consul for the same year.

The professions exercised by the Balboni in ancient times are very different, but the one that appears to be the most characteristic – beside the agriculture – is the pelt treatment profession. It is a matter of fact that between the signatories of the year 1310 we find BELLEBONUS rewarded with the title of magister and of pillizarius; in Cento, in the XVI century a Balboni branch practices the activity of tanner and finally in Ferrara, in the day of September 20, 1765 Ercole Balboni pays to the local Communal authorities a certain amount of money for the practice of tanning.   Among the Consoles we find, in the year 1326, a Giovanni Balboni that gives authorization to perform a general assembly within the Communal house in order to conduct business with the inhabitants of Pieve di Cento.

It is not known if the importance of the Balboni family was due to the LONGOBARD origin, thus of “ariman” descent, or due to the BYZANTINE origin and therefore in competition with other families for the local supremacy. It is a fact, nevertheless, that the Bologna bishop in open rivalry with the Nonantola abbot (ancient center of Longobard power) and in competition with the Bologna municipality, distributed with different rights land to be reclaimed to the families and peasants of “ariman” origin, and among those the Balboni.   Finally we feel appropriate to indicate that the good looks – typical of the Longobard race – is a common characteristic of the Balboni families, while their industrious characteristic make them common with the people from Emilia-Romagna; of this, CAVICCHI points out the « economical parsimony of the Ligurians  and the technical-religious intuition of the Etruscans».

From the ancient history up to our days, we can thus point out how the Balboni families have given to the Church, to the society and to the culture, persons of higher values.   Furthermore, the characteristics of nobility  of the families are emerging, namely:

Today, many persons continue to “well deserve” in many social areas such as the ecclesiastic and religious fields, the diplomatic and military fields, the cultural and artistic fields and the industrial and economical fields, all contributing to validate the peerage motto “ IN LABORE VIRTUS”.

The heraldic bearings of the Balboni family of Cento, at the beginning of the XVIII century, is clearly described in the baptismal book of the St. Biagio Church as such:

“Balboni. The arm painted on the upper corner of a window steel bars protection that belongs to a house located in the street “Nome d’Iddio” and owned by Giovanni Balboni, house previously owned by Domenico Angelini and Giovanni Battista Vicini;  bears three red balls, one over two, sited in a triangle on a golden field.”

“Balboni, ancient Cento family, citizens existing in 1118 and now in the Council.” 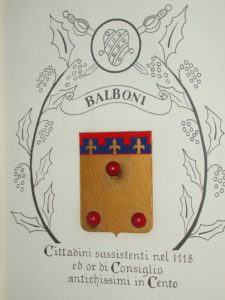 Annibale, Giancarlo, Gabriele and Elio are the names of the four brothers, sons of Giovan Battista Balboni,  founders in the year 1960 of the F.B. S.p.A.   Each carrying its own different professional experiences, with great sacrifices and availability, including a good deal of courage started that “adventure” that, yet today, allows us to be among the manufacturing companies more sought after in Italy and particularly the Emilia region.

Sons of poor farmers and born in good many years difference one from another, grew up during the difficult years of World War II.   It was a period of poverty and hard times, lived with great dignity thanks to the catholic education received by their parents who, even considering the great problems that had to solve day by day, always tried to provide the indispensable to raise the children.

In the second half of the fiftieth , Annibale the eldest, strong of his decennial experience gathered working for MONTEDISON at Ferrara, was asked to perform a job in Sicily in the Priolo refinery, on behalf of BELLELI of Mantova.   It was then that, with his brothers Giancarlo a brick layer, Gabriele a pharmacist and a very young Elio, it was decided to confront, as a team, a job far away from home.   As a matter of fact it was toward the end of the fiftieth, after the BELLELI experience, that it was decided to confront jobs on “its own” starting a company for the realization of plumbing/hydraulic works for civil and industrial applications.   Further to the quick development of sugar factories of those years the brothers started, as well, activities related to steel support structures, tanks, piping including special and general maintenance of the sugar mills.

Toward the end of the seventieth, after a great crisis of the sugar refining industry, a new era started for our company; the prefabrication and assembly of piping for nuclear plants, the construction and assembly of structures for air-coolers, the complete assembly of motors and compressors on skids on behalf of NUOVO PIGNONE and later for DRESSER RAND and SULZER BURCKHARDT.   Contrary to what was required for the sugar industry, the new activity in the energy sector requested a complete different technical approach and a much more demanding production of “quality”.

Fundamental for the company’s growth has been the complete availability, beside the technical capacity and the quality of the products, toward and to solve together the Clients problems; practically for the company there were no Christmas, new Years nor public holidays.   For this reason, a particular merit toward the success of the venture goes to the wives, who, even during difficult times always stimulated the husbands to move forward, without interfering with personal relations or problems.

Today, as before, under the alert guidance of Annibale, Giancarlo, Gabriele and Elio, our generation will try to go forward and continue this adventure; initiated and presently moving among sacrifices, difficulties and ups and downs always within the full respect of personal and business relations.   This is, and will be in the future, the goal of our generation; this is what has been thought to us by our parents.